Hello Sailor, Come On In...

Mike and Rose were just heading out to a late showing of "The Conjuring" and I was letting Jakey out the back door to take care of his nightly business, when Mike yells out to me that there's a dog wandering around our front yard. In the time it took me to get to the front, the chihuahua had already made it into the house and was picking out his bedroom; What the little guy lacked in size, he made up for in chutzpah.

We removed him from the foot of my bed, wrangled his collar off and I called the number on his anchor dog tag thinking how happy his owner would be to hear I had found his little friend; "Mailbox full" was the response I got for my efforts. The next several times I called, the phone didn't even ring, it was the ol' straight to voicemail trick. Perhaps my new found friend had overstayed his welcome at his own house and  was looking to branch out.

Resigned to my houseguest,  I dragged up the dog crate up from the basement, fitted it with a Red Cross blanket (seeing as he was kind of a refugee in distress), gave him some water and a treat, and made plans to track down his owner through his Ash Creek rabies tag in the morning.
He just sat and wagged his tail.
We were all just getting to know each other, when the phone rang and a hopeful voice asked " Do you have my dog?".
"Yes. Yes I do."
We made arrangements for pickup and few minutes later my tiny houseguest was happily wagging his tail from the front seat of his owner's jeep.
I'm glad my story has a happy ending, and Jake is happy he hasn't lost his spot at the foot of my bed. 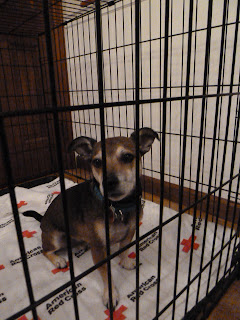